Since my mother’s death when I was 13 years old, I had been preparing in all ways, through all my education and work, to be ready, willing, and able for the time when I could take care of my father through his death.  I knew intuitively that it was part of my healing, and that it was my work of this lifetime, and what I was meant to do.  There was no greater service than to be his companion, his midwife, his comforter at the end of his life, and I knew that it was also the most awesome and sacred work to be done.

I loved him unconditionally, even in his snarly and cantankerous moments, when he was least himself and in an impostor’s angry body.  I was glad to be of service to him, overlooking his moods, anxiety, questions, and frustrations as he became sicker and weaker.  Helping him into his last days was to be like weaving a fabric that would hold him, hold me, and hold our family together.  Being with him through his dying was more than an assignment, a duty, a payback, an obligation…it was my gratitude, my honor, my privilege, my last great adventure with a man who had been all over the world.  He was a world-class yachtsman and renowned navigator.  We were now going into unexplored territory and he needed me as a navigator and helmsman.

In those days there was wonder and magic to be grateful for, despite his agitation at not being able to catch his breath because of lung cancer.  There was awe as we reviewed his scrapbooks and he retold stories of his sail around the world.

I felt appreciation, a joy in discovering more about this man I cherished.

And throughout his stories and recollections over pictures, there was his understated humility for this great, grand life he had lived.

On his last day, he summed it all up by exclaiming “what a great life!”  Like Montaigne quoting Lucretius, Dad left life like a “well-filled guest at the feast of life” rather than a frail and useless old man.  His perspective of his life and his illness changed the meaning and therefore, the memory of his death.  He believed his death was “right” as his life had been “right”, but he would make his death choices as he had made his own choices in life.  There was a natural progression to life and in dying, he believed, and he told me as we considered alternative therapies, “there are just so many times an old hull can be patched.”  He took all the responsibility he could for his health and made all the decisions he could about his illness, and in the end, decided when it was a good day to die and how he wanted to let go.  He was wise and knowing about who could support him, and he made those choices too.

It was my greatest honor to be his mid-wife in death, to help him to the other side.  I wouldn’t have had it any other way.  How one dies can actually be a form of healing, for the person dying and those of who have to say good-bye. 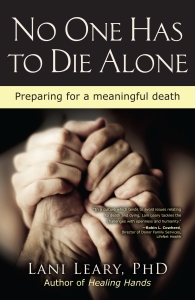